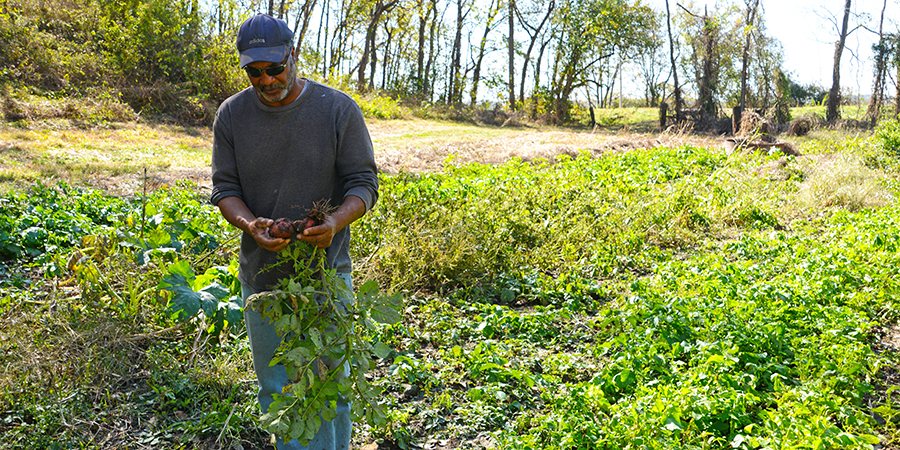 MIchael Pearl holding radishes grown on his 125-year-old family farm in Platte County, Mo. He received a Get Farming Mini Grant, which he used toward the purchase of a tractor that helped increase food production.

Michael Pearl is a fifth generation farmer and owner of The Pearl Farm, which  has been in his family since his great-grandfather Milton Paxton who started growing food on the land after relocating to the Missouri from Kentucky with his slave owner.

Although Michael grew up farming, he attended the University of Kansas on a football scholarship and graduated with a degree in advertising. He spent years working in New York and with large brands throughout the country. Eventually, his work led him back to Kansas City and to his family’s land.

He continued his corporate advertising work, but being back on the land felt right, he said. Soon he began to plant vegetables for his family and friends. Before he knew it, his vegetable crops blossomed into a business. He set up a roadside vegetable stand and began offering his produce at area farmers markets and the VA Hospital and started selling to area restaurants.

“I like the creativity of farming, and the discipline, nurturing and solitude aspects of it as well,” Michael said. “It’s always teaching you something.”

Michael received a grant to purchase a tractor to expand their overall productivity and clear a new space to plant an acre of potatoes. It enabled him to quadruple his growth, which meant more local food for area residents, including veterans at the VA Hospital, SNAP recipients and local food pantries.

“We have helped feed over 1,800 people, several hundred of which are in the inner city and don’t have access to local, farm fresh, healthy foods,” Michael said. “In addition, we’ve made donations to City Union Mission and Temple of Faith, inner city food pantries.”

Your gifts help Cultivate KC support local farmers like Michael. Through this Get Farming Mini Grant, Cultivate KC was not only able to support Michael and his family’s farm business, we were also able to further support the community since he was able to expand production at the VA Hospital and accept more SNAP customers. 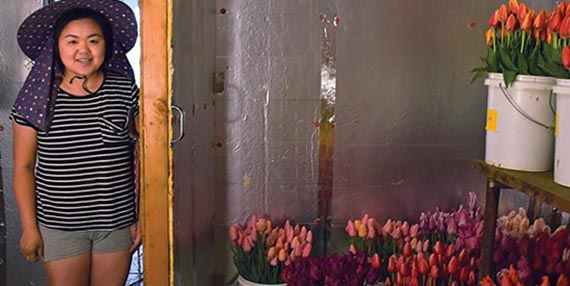