Even in late winter, Linda Hezel is busy at Prairie Birthday Farm, in Kearney, Mo.

Yes, there’s plenty to prepare as spring teases its arrival. But even away from the 14 raised beds and wild vegetation – and the ducks, chickens, bees and horses – there are classes and workshops to research, plan and outline and a dish to prepare for an event.

On this day, she is preparing stuffed duck egg with foraged greens, including pepper grass, chickweed and dandelion greens.

“I think is food is only limited by our own imagination, our creativity, perhaps our arrogance,” Hezel said.

So Hezel uses her own creativity – with extensive literature research – to utilize as much of what the land produces as possible. In growing seasons, she’s reaping a bounty of vegetables and greenery. But she’s also using biochar and even incorporates dried elements into tablescapes.

She says she teaches volunteers not to pull all weeds because people often don’t think of them as food. Hezel enjoys (and seeks!) volunteers, who she does not view as mere task doers. Instead, she exchanges education (and goodies from the farm) for their assistance.

“I am teaching the whole time,” she said. “It’s more an immersion than a task-oriented experience.”

She refers to it as “soil quilting,” referencing the social practice of gathering around a quilting project to exchange knowledge and stories between participants. With volunteers she works elbow-to-elbow as she guides the work.

Her dedication to education and mentoring was recognized at Cultivate KC’s 13th Annual Farmer and Friends meeting, where Hezel was awarded the John Kaiahua Mentorship Award.

The scholastic aspect of farming comes easily for Hezel, who prior to being a food grower, was a tenured professor in nursing at UMKC. There she helped develop, design and instruct in the bachelor and graduate programs.

She left that position to raise a family, and, as it would turn out, a farm. She was committed to growing and making her own food and providing flavorful “nutrient dense, unpoisoned food” to her family, which, she knew from nursing, was essential to her children’s longterm health.

She says combining her “farm practice” with the education she provides to visitors, she doesn’t feel like she’s left nursing.

“I’m just specializing in a different branch,” she says with a smile.

Hezel grew up on a farm herself and said there were always “tiny pots of something growing” everywhere she lived. In 2003, she made her first sale of wild persimmon. And with some referrals, her career as a food grower evolved organically from there.

“I wasn’t as intentional then,” she said. “It took over me as opposed to me taking over it.”

Now she sells to more than 20 area chefs year-round. “I love working with chefs because they are artists of the plate, and I say I am an artist of the soil.”

Beyond the purity of her farming practice, what appeals to the chefs about Hezel’s produce is the flavor. Her tagline, after all, is “exquistive flavor, healthy food.”

And Hezel doesn’t take credit for that. It’s about the soil, she says. With her science background, Hezel knows that flavor is influenced by the microbiome of the soil as much as one’s own microbiome influences your health. It’s all connected, she says.

“Everything is always a diet,” she said. “We’re always at battle with something in our diet.” She believes that if you start with good, organic, untreated food, eating would be, as it should, a more enjoyable experience.

“It’s a fundamental joy of the human experience,” she said.”If it tastes good, we want to eat it, and it’s good for us, right? “It’s not a have to, shoulda, coulda. It’s a joy.” 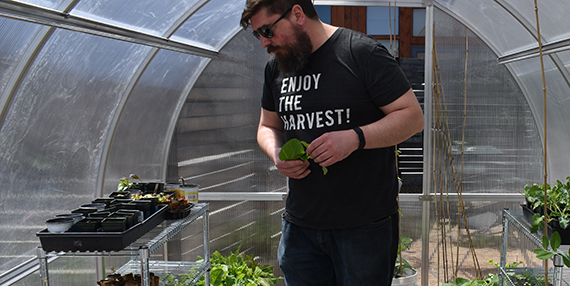