Philpott’s presentation previewed range of topics for his upcoming book about food systems in our country.

He touched on everything from watersheds to food distribution systems and reserved the latter half of his speaking time for questions and conversation from the audience.

A good time was had by all, but most especially, perhaps, by the presenter himself.

“It’s always fun for someone who writes about this stuff to talk to a really knowledgeable audience and think about things in a new way,” he said. “I really wanted to have a robust conversation, and the people did not let me down.”

The Texas-based writer will be back in Kansas City on August 10 as a panelist at a conference hosted by the Organization for Competitive Markets.

Another pre-tour event was a the kickoff cookoff, which pitted Bryan Sparks (Boulevard Bistro) against Bryant Winger (Travernonna) in a friendly showdown using ingredients from Powell Gardens’ weekly CSA offering. The event took place at the Ewing Marion Kauffman Foundation.

Charitable, educational and community gardens highlighted the way growing sites could not only provide neighborhoods and groups food but also a place for different types of community building.

The selected sites represented all regions of the city, including several in the urban core. Family Bikes organized bike tour for those who wanted to pedal to some of those sites, visiting growers including Ivanhoe and Manheim Gardens.

New to this year’s tour was Cultivate KC’s Farm Crawl. At each of our farm sites, ticketholders for this additional event were offered a food and drink from a local purveyor.

At the Food Forest, Craig Howard of Howard’s Cafe and Grocery served sandwiches of local chicken and a jam made from fruit foraged from the site earlier. The sandwiches were served alongside a selection of beers from Crane Brewing.

At the Westport Commons Farm, our friends at The Sundry provided Farm Crawl attendees a bountiful and beautiful charcuterie selection while a craft mixer from Restless Spirits served up gin margaritas. And yes, they were as delicious as they sound.

At Juniper Gardens Training Farm, Betty Rae’s Ice Cream provided sweet relief from the 90-plus degree heat and complimented S.D. Strong gin in a cocktail mixed with their champagne and grapefruit sorbet. 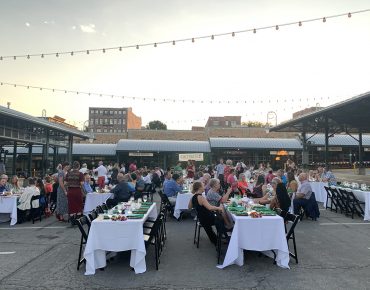 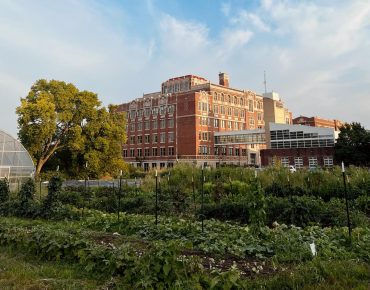 Big Things are Happening at WCF