Mike Rollen of Ophelia’s Blue Vine started his farming business in 2014. His biggest inspiration for growing was his Grandmother.

As single mother who raised eight children, she knew how to stretch the dollar and that meant growing her own food. She also was a small business owner, being the first black seamstress in the town where they lived. Ophelia was her name and his farm is in tribute to the great values he feels she instilled in him.

Mike enjoyed tending to the family garden as a kid and didn’t think much about growing food through college, but once he had his own family and children he found he wanted to show his kids “what real food tastes like”.

At first, it was a hobby, something to enjoy in his spare time. While working on a documentary as a TV producer, he met a few people in Ivanhoe and was introduced to “this urban farming thing”. From there he realized he wanted to buy land and try his hand at starting a farm business. He started selling at the Ivanhoe market and then purchased a parcel of land from the land bank.

However, after the land had been purchased Mike was reading about high levels of lead that were prevalent in KC on re-purposed land. He decided to have his soil tested and got devastating news – his soil had high levels of both arsenic and lead.

Despite the bad news, and some very high estimates for soil remediation, he decided to make a go of it and fix it the right way.

First, he knew he couldn’t farm on the land as-is, so he started renting space all over the metro from places like Kansas City Community Gardens and Ivanhoe. He had sweet potatoes in one location and other crops spread across various plots of land.

He reached out to Cultivate KC and other partners for help on a dilution strategy. It was the help and partnerships coming together that pushed him to keep going.

“Growing local food is so important, you can’t put a price on it. It was great to have Cultivate KC to help out. I just feel really blessed for that,” Mike said.

Fast forward three years and Mike is adding the final soil for remediation and preparing for final testing. He is working to get a high tunnel up and is looking forward to feeding his community. He specializes in collard greens, kale and herbs. He is excited to have a stand on the farm for the community to stop by and purchase produce on-site, plus a CSA, the farmers market and wants to partner with schools as well.

Cultivate KC awarded Ophelia’s Blue Vine a $3,000 Get Farming Mini Grant for soil remediation and fencing. Through technical assistance Katherine Kelly visited the farm and made suggestions for further remediation strategies and suggested he use landscaping fabric.

Despite many challenges, Mike has persevered thanks to partnership and people coming together to help him. You can find Mike during the growing season at the Ivanhoe Farmers Market. You can also find 1 oz. packages of fresh Ophelia’s Blue Vine Herbs at six Hy-Vee locations in the KC Metro area. 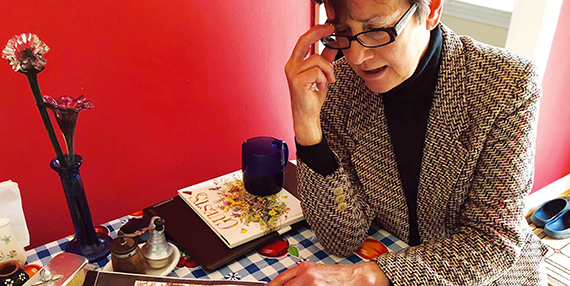